This post is for documentation only. It was going to be a rebuttal to jwh's Mercurial fanboyism but I realised while writing it and re-reading his post that I have absolutely no idea what he's talking about, nor can I work out how to get hg to tell me.

Given a repo of:

My proposals for alternatives to this simple workflow are as follows. These all result in the same order of code going into the master branch, but have different histories. (Actually, I think there's still mistakes in there but I'm tired of staring at the horrible procedural script that generates it, so it'll do).

1. A flat history, made by rebasing everything on top of master instead of merging:

2.Only merges on master, giving you the illusion of a neat history...

...but, underneath, loads of ugly information available: 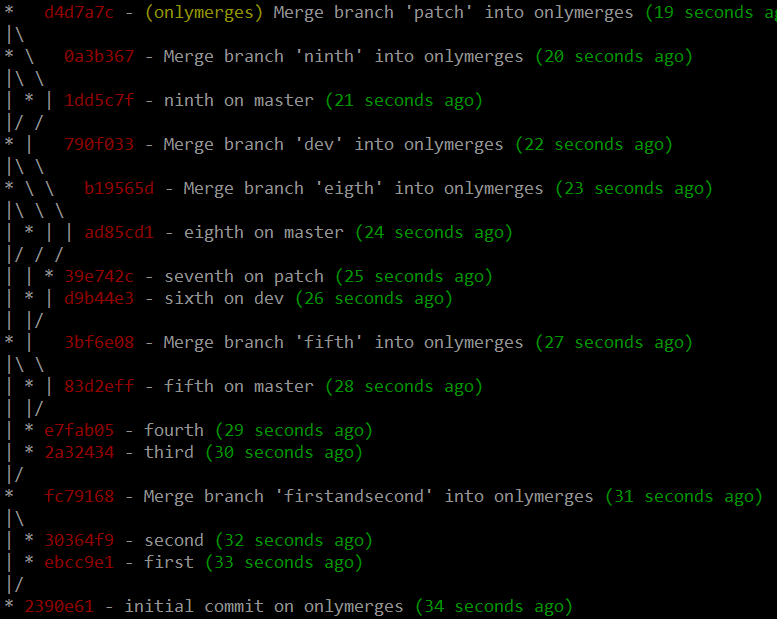 3. A hybrid, supercommits, whereby you keep a flat history but you maintain where branches were:

...or, with the history information visible:

Serious concurrent projects like git itself use the 'only merges on master' approach. I strongly agree that they shouldn't be flattening the history; it's nice to be able to see groups of patches as they go into master, and to navigate the history of "feature commits", instead of the history of "developer changes".

The flat model seems to work much more like how I think about software development:

'Supercommits' is a hybrid of these two; you can use the rebase-onto-master workflow from 'flat', but you can logically group your set of commits into a... family? I like this idea, but haven't really implemented it in practice so can't really comment.

(Apologies for screenshots of text; I'm lazy, ansifilter was NOT WORKING and it's prettier than gitk.)